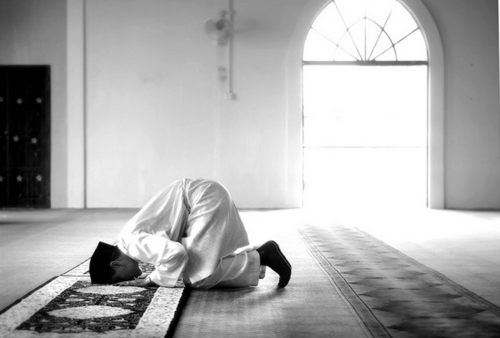 The Secret of Prayer: Sujood

(The Salah series by Jinan Bastaki)

We have now arrived at the sujood (prostration). Ibn Al-Qayyim described the sujood as the secret of prayer, the greatest pillar, and the seal of the rukoo’. He said all the other actions we did before it were just preludes.

We should step back and reflect: what do we feel when we go into sujood? Some of us simply do it because it is a part of prayer; others because it is where we can make du`a’ (supplication). But how many of us feel the humility of the soul, as we put our faces on the ground, in glorification of God?

Where do we find happiness? Not material happiness, but true internal happiness. As Muslims, we may respond that true happiness in this world comes from being closer to God. The closer you are to Allah, the more your heart is at rest. This is why the Prophet ﷺ chose to be with Allah, saying “God has given a slave the choice between immortality in this world for as long as God wills, or meeting his Lord, and he has chosen to meet his Lord.” When Abu Bakr (radi Allahu `anhu – may Allah be pleased with him) heard this he wept, because he knew that the Prophet ﷺhad chosen being with Allah over this life.

To be close to Allah, you have to go into sujood. The Prophet ﷺ said:

The more you humble yourself and go into sujood, the closer you are getting to Allah; and indeed, He elevates you. The Prophet ﷺ said:

من تواضع لله رفعه
“Whoever humbles himself before Allah, Allah will elevate him.” (Muslim)

This is why, whenever the Prophet ﷺ received something that pleased him, he would immediately prostrate to Allah in thanks. Allah has said in the Qur’an to the Prophet ﷺ

Rising up to the heavens

Ibn Taymiyyah said that the souls of people are brought closer to Allah during prostration. The Prophet ﷺ taught us:

اكثر من السجود فإنه ليس من مسلم يسجد لله تعالى سجدة الا رفعه بها الله درجة في الجنة وحط عنه بها خطيئة
“Prostrate much because there is no Muslim that prostrates to God except that God raises him one degree in Paradise by it and forgives for him a sin.” (Ahmad)

The more you prostrate, the more you raise your ranks in paradise insha’Allah (God willing), until we reach the highest level, Jannat Al-Firdaws (Paradise), and this is where the Prophet ﷺ will be. And the roof of this particular level is the Throne of the All-Merciful. How do we know that prostration allows us to achieve this? Rabi’a bin Ka’b (ra), a companion of the Prophet ﷺ said:

“I was with Allah’s Messenger ﷺ one night and I brought him water and what he required.

I said: ‘I ask your company in Paradise.’

He said: ‘Anything else besides it?’

He said: ‘Then help me to achieve this for you by devoting yourself often to prostration.’” (Muslim)

The Prostration of the Heart

Does the heart prostrate? It does, and to a greater degree than the body. The prostration of the heart is in its humility, such that a person could physically rise from prostration, yet his heart would still be performing sujood. It does so with the knowledge that it is Allah who guides, who raises people and lowers others, who shows mercy but also punishes, and who removes the afflictions and sadness of the heart. If your heart does not experience a certain type of brokenness, the humility that we speak of, then an important component of sujood is missing.

The da’iya (caller to Allah) Mishary Al-Kharraz was once asked “How do I know whether my heart is in a state of humility or not?” He answered, “When you feel it, you will know.”It is impossible for your heart to be prostrating in humility to Allah and for you not to feel it. Allah says in the Qur’an:

سيماهم في وجوههم من أثر السجود
“Their mark is on their faces from the trace of prostration…” (48:29)

Most people assume that the “mark” refers to the physical mark on one’s forehead that sometimes appears when one prostrates much. However, commenting on this verse, Mujahid stated that the “marks” refer to the marks of humility that come from khushoo’ (devotion), and this is just in the dunya (world). In the Hereafter, Al-Jalalayn described it as a light and radiance by which these people will be recognized. The Prophet ﷺ said:

إن أمتي يومئذ غر من السجود محجلون من الوضوء
“My ummah on that day will surely have bright faces because of sujood, and bright arms and feet because of ablution.” (Ahmad)

The prostration is so important that Satan hates us for it. It has been narrated that when the son of Adam recites the verse of Sajdah (prostration) and then falls down in prostration, Satan goes into seclusion and weeps and says: “Woe unto me, the son of Adam was commanded to prostrate, and he prostrated and Paradise was entitled to him and I was commanded to prostrate, but I refused and am doomed to Hell.” (Muslim)

Subhan’Allah (Glory be to Allah), a person died in prostration in the Prophet’s ﷺ Mosque. We do not know who he is, or what things he has done in his life, just that Allah blessed this person to pass away in that state.

The Prophet ﷺ said: “How many a seemingly disheveled, dusty, negligible person, but if he would swear to God, He would respond to him.” (Tirmidhi)

We are resurrected upon our final states. What position will we be in?

May Allah allow us to perfect our prayers so that our hearts are evermore attached to Him. Ameen.

2 thoughts on “The Secret of Prayer: Sujood”